re-frame is a functional framework for writing SPAs in ClojureScript, using Reagent.

Being a functional framework, it is about two things:

And, because it is a reactive framework, the “data coordinates the functions” (and not the other way around).

re-frame is often described as a 6-domino cascade:

The six dominoes are: 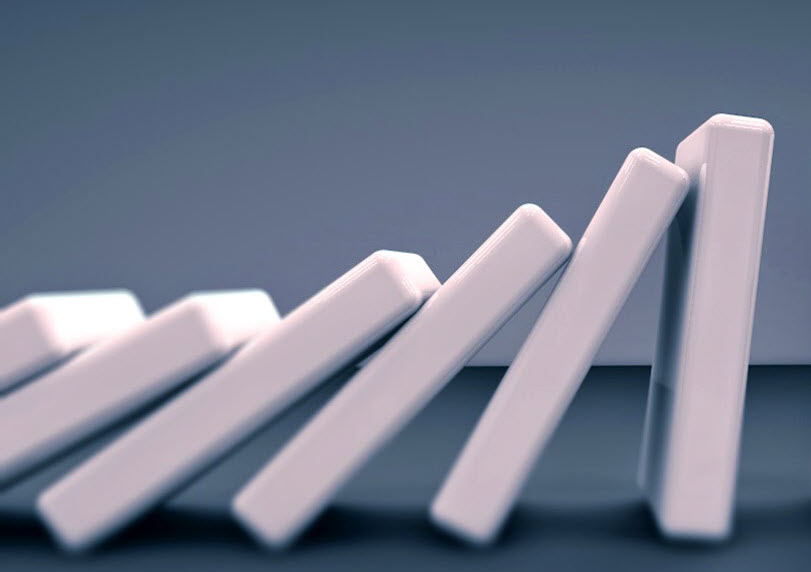 The purpose of this tutorial is to explain how to write the code of a re-frame app that corresponds to those 6 dominoes.

This article is an interactive rewrite of the code walkthrough from re-frame repo. It is published with the blessing of Mike Thompson. Some of the details have been omitted in order to keep the article as easy to read as possible. Be sure to read also the original article to fill out all the details.

The interactive snippets are powered by Klipse.

There are two kinds of Klipse snippets in this article:

If you really want to become a re-frame master, take a video course on re-frame.

In order to use re-frame, you have to require both re-frame and reagent:

Begin with the end in mind

The app we are going to build contains around 70 lines of code.

When it is running, here’s what it looks like:

In re-frame, there is this notion of a single app database (sometimes called store or app state) that holds all the data of our application. We call it the app-db. In our case, the app-db will contain a two-key map like this:

Events are data. re-frame uses a vector format for events. For example:

The first element in the vector, :time-color-change, is a keyword which identifies the kind of event. The further elements are optional, and can provide additional data associated with the event. The additional value above, "red", is presumably the color of the time display.

Rule: events are pure data. No sneaky tricks like putting callback functions on the wire. You know who you are.

To send an event, call rf/dispatch with the event vector as argument:

Feel free to uncomment the code snippet just above and see how the color of the time display is updated at the top of the page.

dispatch puts an event into a queue for processing.

So, an event is not processed synchronously, like a function call. The processing happens later - asynchronously. Very soon, but not now.

The consumer of the queue is a router which looks after the event’s processing.

As a re-frame app developer, your job, then, is to write and register an event handler (function) for each kind of event.

In this application, 3 kinds of event are dispatched: :initialize, :time-color-change and :timer.

Event handlers can be registered via either reg-event-fx or reg-event-db (-fx vs -db). Because of its simplicity, we’ll be using the latter here: reg-event-db.

reg-event-db allows you to write simpler handlers for the common case where you want them to take only one coeffect - the current app state - and return one effect - the updated app state.

Here is the syntax of reg-event-db:

The handler function you provide should expect two arguments:

Each event handler must compute and return the new state of the application, which means it returns a modified version of db (or an unmodified one, if there are to be no changes to the state).

On startup, application state must be initialized. We want to put a sensible value into app-db, which starts out containing {}.

So a (dispatch [:initialize]) will happen early in the app’s life (more on this below), and we need to write an event handler for it.

Now this event handler is slightly unusual because not only does it not care about any event information passed in via the event vector, but it doesn’t even care about the existing value in db - it just wants to plonk a completely new value:

Let’s initialize our app now, by dispatching an [:initialize] event that will be handled by the event handler we just wrote:

Now, we set up a timer function to (dispatch [:timer now]) every second:

(We use defonce in order to ensure that no more than a single timer is created.)

And here’s how we handle it:

When the user enters a new colour value a :time-color-change event is going to be dispatched via the view.

Here is how we handle a :time-color-change event:

Domino 3 realises/puts into action the effects returned by event handlers.

In this “simple” application, our event handlers are implicitly returning only one effect: “update application state”.

This particular effect is accomplished by a re-frame-supplied effect handler. So, there’s nothing for us to do for this domino. We are using a standard re-frame effect handler.

And this is not unusual. You’ll seldom have to write effect handlers…

Ultimately, the data returned by query functions is used in the view functions (Domino 5).

reg-sub associates a query id with a function that computes that query, like this:

Then later, a view function (domino 5) subscribes to a query like this: (subscribe [:some-query-id]), and a-query-fn will be used to perform the query over the application state.

Each time application state changes, a-query-fn will be called again to compute a new materialised view (a new computation over app state) and that new value will be given to all view functions which are subscribed to :some-query-id. These view functions will then be called to compute the new DOM state (because the views depend on query results which have changed).

Along this reactive chain of dependencies, re-frame will ensure the necessary calls are made, at the right time.

Remember that our application state is a simple Clojure map. In fact, re-frame allows us to access the app state:

(By the way, the following code snippet is evaluated in a loop every second…)

Returning the :time-color of our app state is a simple as this:

Here’s the code for defining our 2 subscription handlers:

Notice that we don’t have to deref the app db atom as re-frame passes to the subscription handlers the content of the atom.

View functions turn data into DOM. They are “State in, Hiccup out” and they are Reagent components.

An SPA will have lots of view functions, and collectively, they render the app’s entire UI.

Hiccup is a data format for representing HTML.

And if we call it:

Yep, that’s a vector with two elements: a keyword and a string.

But when we render it with reagent, it becomes a DOM element

Now, greet is pretty simple because it only has the “Hiccup Out” part. There’s no “Data In”.

To render the DOM representation of some part of the app state, view functions must query for that part of app-db, and that means using subscribe.

There’s only one (global) subscribe function and it takes one argument, assumed to be a vector.

The first element in the vector (shown above as query-id) identifies the query, and the other elements are optional query parameters. With a traditional database a query might be:

In re-frame, that would be done as follows: (subscribe [:customer-query "blah"]), which would return a ratom holding the customer state (a value which might change over time!).

Because subscriptions return a ratom, they must always be dereferenced to obtain the value. This is a recurring trap for newbies.

This view function renders the clock:

As you can see, it uses subscribe twice to obtain two pieces of data from app-db. If either change, re-frame will re-run this view function.

We can render the clock as any other reagent component:

The cool thing is that when we change the a value in our app state, the clock changes immediately:

Uncomment the following swap! expression and see how the clock changes its color:

And this view function renders the input field:

Notice how it does BOTH a subscribe to obtain the current value AND a dispatch to say when it has changed.

It is very common for view functions to run event-dispatching functions. The user’s interaction with the UI is usually the largest source of events.

We can render the color-input as any other reagent component:

And then a view function to bring the others together, which contains no subscriptions or dispatching of its own:

Below, run is called to kick off the application once the HTML page has loaded.

It has two tasks:

After run is called, the app passively waits for events. Nothing happens without an event.

The run function renders the app in the DOM element whose id is app: this DOM element is located at the top of the page. This is the element we used to show how the app looks like at the begining of the article.

Because I know you are too lazy to scroll up till the begining of the article, I decided to render the whole app as a reagent element, just here:

When it comes to establishing initial application state, you’ll notice the use of dispatch-sync, rather than dispatch. This is a simplifying cheat which ensures that a correct structure exists in app-db before any subscriptions or event handlers run.

I hope you enjoyed this interactive tutorial and got a better understanding about how to write a re-frame application.

But if you really want to become a re-frame master, take a video course on re-frame.