When adhering to Principle #1 of DOP, code is separated from data. DOP is not opinionated about the programming constructs to use for organizing the code, but it has a lot to say about how the data should be represented. This is the theme of Principle #2.

This article is an exploration of the second principle of Data-Oriented Programming. The other principles of DOP are explored here:

In DOP, data is represented with generic data structures (like maps and arrays) instead of instantiating data via specific classes. In fact, most of the data entities that appear in a typical application can be represented with maps and arrays (or lists). But there exist other generic data structures (e.g., sets, lists, queues, etc.) that might be required in some use cases. Let’s look at the same simple example we used to illustrate Principle #1 (data that represents an author).

An author is a data entity with a firstName, a lastName, and the number of books they have written. Principle #2 is broken when we use a specific class to represent an author as this listing reveals.

Principle #2 is followed when using a map (a dictionary or an associative array) as a generic data structure that represents an author. The following listing illustrates how we can follow this principle in OOP.

In a language like JavaScript, we can also instantiate a map via a data literal, which is a bit more convenient. The following listing shows an example.

Using generic data structures to represent data has multiple benefits. We cover these benefits in greater detail in the following sections:

Using functions that are not limited to a specific use case

Using generic data structures to represent data makes it possible to manipulate data with a rich set of functions that are available on those data structures natively in our programming language. Additionally, third-party libraries also provide more of these functions. For instance, JavaScript natively provides some basic functions on maps and arrays, and third-party libraries like Lodash (https://lodash.com/) extend the functionality with even more functions. There is a famous quote by Alan Perlis that summarizes this benefit:

When an author is represented as a map, the author can be serialized into JSON using JSON.stringify(), which is part of JavaScript. The following listing provides an example.

Serializing author data without the number of books can be accomplished via Lodash’s _.pick() function. The following listing uses _.pick() to create an object with a subset of keys.

When adhering to Principle #2, a rich set of functionality is available for data manipulation.

When using generic data structures, the data model is flexible, and data is not forced into a specific shape. Data can be created with no predefined shape, and its shape can be modified at will.

In classic OOP, when not adhering to Principle #2, each piece of data is instantiated via a class and must follow a rigid shape. When a slightly different data shape is needed, a new class must be defined. Take, for example, AuthorData, a class that represents an author entity made of three fields: firstName, lastName, and books. Suppose that you want to add a field called fullName with the full name of the author. If we fail to adhere to Principle #2, a new class AuthorDataWithFullName must be defined. However, when using generic data structures, fields can be added to (or removed from) a map on the fly as the following listing shows.

Working with a flexible data model is particularly useful in applications where the shape of the data tends to be dynamic (e.g., web apps and web services).

Part 1 of my book explores in detail the benefits of a flexible data model in real-world applications. Next, let’s explore the cost for adhering to Principle #2.

As with any programming principle, using this principle comes with its own set of trade-offs. The price paid for representing data with generic data structures is as follows:

Retrieving and storing the value associated to an arbitrary key from a map is a bit slower than with a class member.

When data is instantiated from a class, the information about the data shape is in the class definition. Every piece of data has an associated data shape. The existence of data schema at a class level is useful for developers and for IDEs because

When generic data structures are used to store data, the data shape is not part of the data representation.

Cost #3: No compile-time check that the data is valid

Look again at the fullName function in the following listing, which was created to explore Principle #1. This function receives the data it manipulates as an argument.

When data is passed to fullName that does not conform to the shape fullName expects, an error occurs at run time. With generic data structures, mistyping the field storing the first name (e.g., fistName instead of firstName) does not result in a compile-time error or an exception. Rather, firstName is mysteriously omitted from the result. The following listing shows this unexpected behavior.

When we instantiate data via classes with a rigid data shape, this type of error is caught at compile time. This drawback is mitigated by the application of Principle #4 that deals with data validation.

When data is represented with generic data structures, data shape errors are caught only at run time.

Because the information about the exact type of the field values is not available at compile time, when accessing a field, an explicit type cast is required. For instance, in order to check whether an author is prolific, the value of the books field must be type cast to an integer as this listing shows.

Some Java JSON serialization libraries like Gson (https://github.com/google/gson) support serialization of maps of type Map<String, Object>, without requiring the user to do any type casting. All the magic happens behind the scenes!

C# supports a dynamic data type called dynamic (see http://mng.bz/voqJ), which allows type checking to occur at run time. Using this feature, author data is represented as a dictionary, where the keys are of type string, and the values are of type dynamic. The next listing provides this representation.

The information about the exact type of the field values is resolved at run time. When accessing a field, no type cast is required. For instance, when checking whether an author is prolific, the books field can be accessed as though it were declared as an integer as in this listing.

DOP uses generic data structures to represent data. This might cause a (small) performance hit and impose the need to manually document the shape of data because the compiler cannot validate it statically. Adherence to this principle enables the manipulation of data with a rich set of generic functions (provided by the language and by third-party libraries). Additionally, our data model is flexible. At this point, the data can be either mutable or immutable. The next principle illustrates the value of immutability.

To comply to this principle, we represent application data with generic data structures, mostly maps and arrays (or lists). The following figure provides a diagram as a visual representation of this principle. 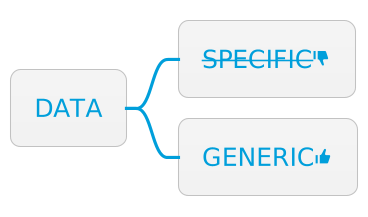 The cost for implementing this principle includes