Object-Oriented Programming is well known for allowing different classes to be called with the same interface, via a mechanism called polymorphism. It may seem that the only way to have polymorphism in a program is with objects. In fact, as we are going to see in this article it is possible to have polymorphism without objects via multimethods.

Moreover, multimethods provide more advanced polymorphism than OOP polymorphism as they support cases where the chosen implementation depends on several argument types (multiple dispatch) and even on the dynamic value of the arguments (dynamic dispatch).

The essence of polymorphism

In OOP, polymorphism is about defining an interface and having different classes that implement the same interface in different ways.

Let’s illustrate polymorphism with an adaptation of the classic OOP polymorphism example: animal greetings. Let’s say that our animals are anthropomorphic and each of them has its own way to greet, by emitting its preferred sound and telling its name.

In Java, for instance, we’d define a IAnimal interface with a greet method and each animal class would implement greet in its own way, like this:

Now, let’s ask ourselves: what is the fundamental difference between OOP polymorphism and a naive switch statement?

Let me tell you what I mean by a naive switch statement. We could, as Data-Oriented programming recommends, represent an animal with a map having two fields name and type and call a different piece of code depending on the value of type, like this:

It makes me think that we have not yet met our animals. For no further due, I am happy to present our heroes: Fido, Milo and Clarabelle.

The first difference between OOP polymorphism and our switch statement is that, if we pass an invalid map to the greet function, bad things will happen.

This could also be easily fixed by having a separate function for each animal, like this:

But what if you want to extend the functionality of greet and add a new animal?

The main benefit of polymorphism is that it makes the code easily extensible.

Now, I have a surprise for you: We don’t need objects to make our code easily extensible. This is what we call: polymorphism without objects. And it is possible with multimethods.

Multimethod is a software construct that provides polymorphism without the need for objects.

Multimethods are made of two pieces:

A dispatch function is similar to an interface in the sense that it defines the way the function needs to be called. But it goes beyond that as it also dispatches a value that differentiates between the different implementations.

And each dispatch value is handled by a specific method: 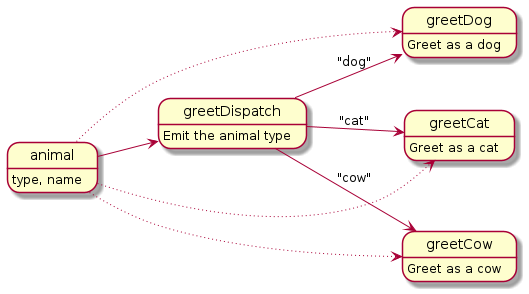 For now, our multimethod receives a single argument. But in the next section, it will receive several arguments.

Then, we need a method for each dispatch value. In our case, we’ll have greetDog for dogs, greetCat for cats and greetCow for cows:

It is important to notice that each method declaration could live in its own file. That’s how multimethods provide extensibility: We are free to add new methods without having to modify the original implementation.

Method declarations are decoupled from the multimethod initialization

Under the hood, the arrows/multimethod library maintains a hash map, where the keys correspond to the values emitted by the dispatch function and the values are the methods. When you call the multimethod, the library queries the hash map to find the implementation that corresponds to the dispatched value.

In terms of usage, we call a multimethod as a regular function:

And if by mistake we pass an animal that doesn’t have a corresponding method, we get a NoMethodError exception:

Unless you can declare a default method:

Now our horse can greet:

So far, we have mimicked OOP by having as a dispatch value the type of the multimethod argument. But if you think again about the flow of a multimethod, you will discover something interesting: in fact the dispatch function could emit any value. 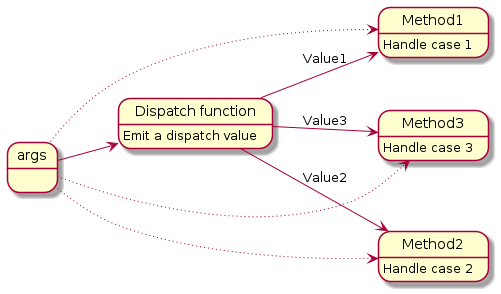 For instance, we could emit the type of two arguments!

Imagine that our animals are polyglot.

Polyglot comes from the Greek polús meaning much and glôssa meaning language. A polyglot is a person speaking many languages.

We represent a language like we represent an animal, with a map having two fields: type and name.

Now, let’s write the code for the dispatch function and the methods for our polyglot animals. Let’s call our multimethod: greetLang. We have:

But before the implementation I’d like to draw a flow diagram. It will help me to make things crystal clear.

I omitted the arrow between the arguments and the methods in order to keep the diagram readable. Otherwise there would be too many arrows.

A dispatch function could emit any value. It gives us more flexibility than with OOP polymorphism

The order of the elements in the array It doesn’t matter but it needs to be consistent with the wiring of the methods.

Take a closer look at the code for the methods that deal with French and tell me if you are surprised to see “Ouaf Ouaf” instead of “Woof Woof” for dogs, “Miaou” instead of “Meow” for cats and “Meuh” instead of “Moo” for cows. I find it funny that that animal onomatopoeia are different in French than in English!

Onomatopoeia comes also from the Greek: ónoma means name and poiéō means to produce. It is the property of words that sound like what they represent. For instance, Woof, Meow and Moo.

Multiple dispatch is when a dispatch function emits a value that depends on more than one argument.

Let’s see our multimethod in action and ask our dog Fido to greet in French:

Dynamic dispatch is when the dispatch function of a multimethod returns a value that goes beyond the static type of its arguments, like for instance a number or a boolean.

Imagine that instead of being polyglot our animals would suffer from dysmakrylexia.

Dysmakrylexia comes from the Greek dus expressing the idea of difficulty, makrýs meaning long and léxis that means diction. Therefore, dysmakrilexia is a difficulty to pronounce long words.

It’s not a real word, I invented it for the purpose of this article!

Let’s say that when their name has more than 5 letters an animal is not able to tell it. 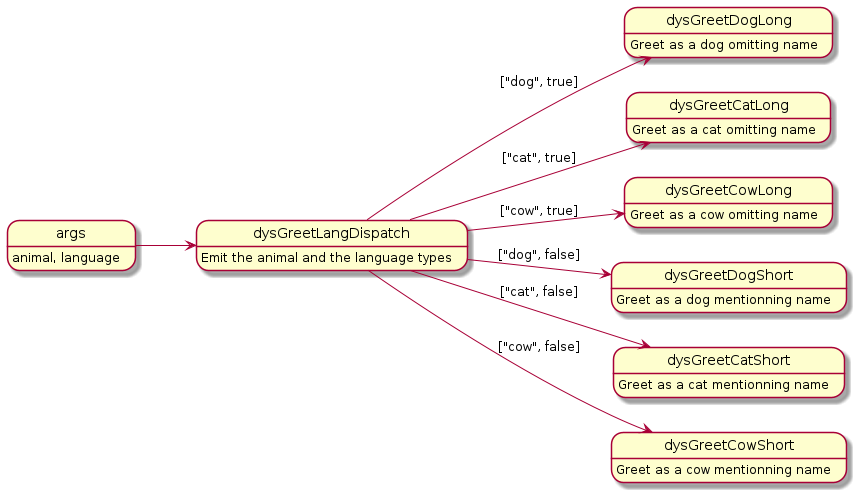 Its dispatch function returns an array with two elements: the animal type and a boolean about whether the name is long or not:

And here are the methods:

And now, if we ask Clarabelle to greet, she omits her name:

Multimethods are available in many languages, beside JavaScript. In Common LISP and Clojure, they are part of the language. In Python, there is a library called multimethods and in Ruby there is Ruby multimethods. Both work quite like JavaScript arrows/multimethod.

In Java, there is the Java Multimethod Framework and C# supports multimethods natively via the dynamic keyword. However, in both cases, it works only with static data types and not with generic data structures. Also, dynamic dispatch is not supported.